The Adventures Of Jack,Book Two, The New World 5

CHAPTER FIVE: WHAT CAN BE DONE?

Matthew ignored the message. After all, he had heard many messages like that, they had all been traps, and this was just another. But what if it was real? He just couldn’t make up his mind. Then he started to run out of fuel! He had no choice now. He turned around and got ready to land.

Meanwhile, Jack saw Matthew comming and told the others. They shouted “it’s working!” over and over again. Then they chopped down some trees to make a runway.

Matthew landed. He picked up his lazer-32-FT-5 guns, and braced himself. But these were not enemies! They were friends.

“Hi” said Jack, Oliver, and Daniel at the same time. ” I remember you” said matthew, “you were the one who helped the most towards winning the last battle.” “Really?” Jack said ” I thought…” “Hey!” Danel Inturrupted “we could go to the nearest city. Iv’e heard  it’s nearby.” “yes we could” said Jack “You, Oliver, go on one of the “s”Speeders you go on annother and Matthew come with me on your “y” Freighter.”

Meanwhile, the bad guys were planning too. Emperor Xzathan arrived and asked “is everything going according to plan?” “yes master Xzathan” said a security droid. But maybe before I carry on with the story I had better show you the bad guys’ ranks: 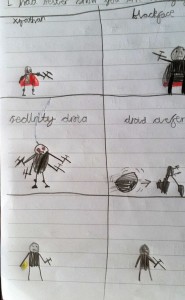