The Adventures Of Jack – Book Two – The New World Chapter 8

On board the black “D” there was a huge explosion, and one of the engines was on fire. It began to fall, and crashed to the ground. Apparently, one of the engines had been hit right where the hot air comes out. This damaged the fuel tank, which then exploded. The ammunition store was nearby, and that caught fire and exploded too, despite the metre-thick door. But, out of the escape pods and planes came an army of robots and people, and they were ready to fight! They were all to fast for the huge “H” ‘s cannons, so the “H” decided to send out it’s own army. Then there was a huge battle. Jack was sent out to recover the old base in his plane, and Blackface in his black one.

They landed, and the place looked rather deserted. It seemed just as they had left it, with the holes in the wall and even the scratches and scrapes from the lasers. Then they heard a noise. It was faint at first and it got louder and louder. It was definitely coming towards them. The noise itself was a rather strange, mechanical noise, combined with some clanking. Suddenly they heard a robot voice saying “Who are you and why are you here?” 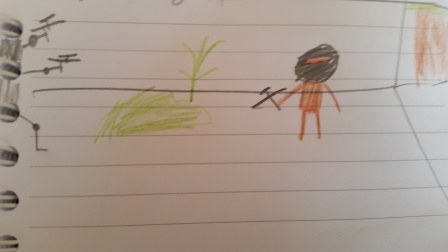