The Adventures Of Jack – Book Two – The New World Chapter 7

The Battle Of The Giants

Jack saw the brown “H” landing. The gangplank came down. “Quick” shouted the Corporal “Come here quickly!” When Jack, Oliver, Blackface, Daniel and Matthew were all on board, they told their stories. First Jack told his – the others were quite surprised to see Blackface on board.

Then, the Corporal told his: “Blackface’s original plan was to take us to the enemy base (which was waiting to blast us to bits) but he changed his mind. Instead, he decided to destroy us then and there, and he would have if it hadn’t been for the brown “H” that picked us up . Well then we saw you being attacked and decided to help”.

“Come on ” said Jack “We need to go to the guns” It was a long battle. It was five days later before any signs of victory were seen and even those were small. But it was Jack’s bravery that won the long, hard battle.

The next day Jack woke up and sensed someone was missing. It was Oliver. Blackface was gone too. “They’ve been arrested” Daniel said “they were going on an early-morning raid and were caught”. “Where would they be?” asked Jack anxiously. “Probably in the enemies’ plane” Daniel answered.

Inside the enemy plane, a black “A” had landed. “I want to check the security systems – can you take me to the prison cells?” asked the pilot. The droids led him to the prison cells. Suddenly, he turned around, shot all the robots and pressed the button to open the door.  It was Jack! He slid down a steep slope, past the laser beams, and to the prison. Then he destroyed the prison bars and ran back to where he had started. Jack left triumphantly with Oliver and Blackface in the plane. 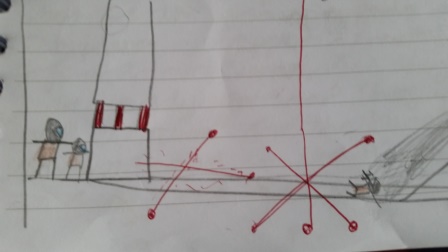