The Adventures Of Jack Book Two The new world 3

Jack was having an ordinary day when he suddenly felt like he was being watched! He turned around to see a head duck under the cover of an “A” plane. He called some Steel Defenders and told them to look on the other side. They did, and much to Jack’s surprise there was nothing there! He looked around and got a shock! Blackface was getting onto an “S” speeder and rode off into the sky.

An hour later, as Jack was wondering what had happened, a “Y” Freighter landed and he saw it was black! Down went the door and out stepped hundreds of Steel Defenders and Droid Defenders. Then the battle started!

There was so much going on that Jack found it hard to concentrate. So many lasers were flying past and so many explosions too. But, despite all this, he hit quite a lot of Steel Defenders and Droid Defenders but the Steel Defenders were harder; they had *Deflector Bubbles which meant they had to be hit before they unrolled.

The base was being destroyed! 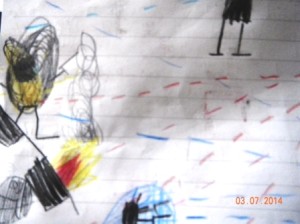 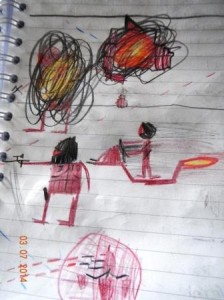 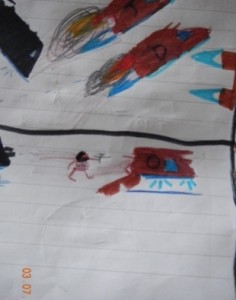 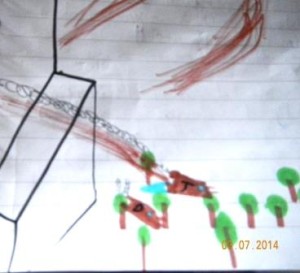 Jack got into a “Y” and flew off. Suddenly he felt a jolt and one of his engines burst into flames! He was losing altitude fast! Quickly he stopped the upper engine and the fire stopped. It was then that he realised how serious the situation was. He crash landed and was knocked out!

* A field of energy which surrounds an object; bouncing off lasers