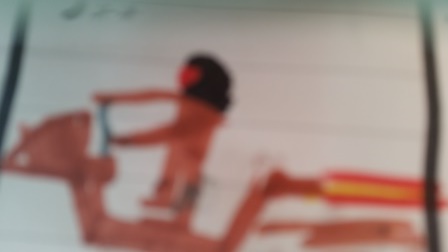 The Adventures of Jack Book Two, The New World 4

CHAPTER FOUR: ADVENTURES IN THE FOREST

Jack slowly opened his eyes, and was surprised to find Oliver bending over him. He said “Why…  how… did…” “Don’t worry,” said Oliver, “I landed in the forest when I saw you crash. Unfortunately my plane has also crashed.” He bent over Jack and said “how are you feeling” Jack replied weakly “okay…”

A few days later Jack was fine and he, Oliver and Daniel (who had crashed as well) looked inside the planes. Here is a list of what they found:

So, as you can see they were in a pretty bad state; they had enough weapons, assistance, and even transport but not much food; they used two crates a day. They had a meeting to discuss what to do. “Let’s go to the top secret base on our S Speeders. After all, that’s where the others went” said Jack.

“No. Unfortunately we don’t know where the base is; only the General does” said Oliver. “Actually I do” said Daniel; “You go to the other side of the forest, turn left at the stone marker, go up a few feet and into the hangar bay.” “Wait!” said Oliver, “That base belongs to our enemies!!” “What? “said Jack “The general’s up to something alright! A few days ago he let Blackface into our base and out again! And how does he look without his hood and cape?” Oliver said ” I will draw him on the back of my list: 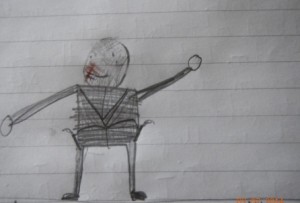 Meanwhile, the planes were flying on not knowing their fate was near! Suddenly on Matthew’s information screen panel there was a message saying: “Hi, Oliver here. The general is actually Blackface. We have crashed in the forest near the entrance to our old base, can you come and help?”