The Adventures Of Jack, Book two, The New World 2

“Driving these things is certainly harder than I thought” Jack said after his first training mission in the Training Room. Suddenly a siren went off and a hole burst into the wall, The General was shouting orders and everyone was getting into planes. Then, there was a powpowpowpowpowpowpowpowpow and another hole was to be seen, and through that hole he could see other planes just like his own except they were black!

Then all the planes started with a noise like a thousand bees together, and off they went, into the unknown. 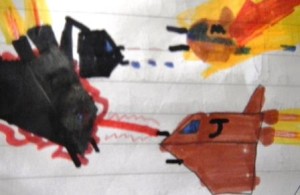 At first, it took a while for his eys to adjust, but when he did he got a shock. There ina plane, was the person he least expected to see; it was Blackface, his worst enemy. He heard a powpowpowpowpow, it was his enemy; firing at one of the brown planes which caught fire and crashed!

Then he saw a black plane right in front of him. Franticaly, he searched for the firing button. Finally he found it and pressed it:

Jack had finally hit something and the battle was won, although the base would need a lot of  repairing.

They were all celebrating about winning the battle when suddenly they saw an enormous plane through the hole in the wall, got into their own planes and flew off.

Just then Jack felt a judder and went off into a spin, and on the Information Screen Panel there was a flashing red sign saying “Danger!”

Jack saw that the doors to the training grounds were open, and he flew right in. When he got out of the plane, it exploded suddenly, throwing him to the ground. Then, all the other planes  landed and saw Jack without any plane. They saw the wreckage of it and guessed what had happened. 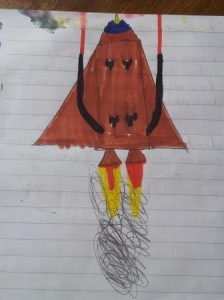 “Are you ok” they said. Jack picked himself up and said “Yes… but… my… plane… is gone.” “Don’t worry you can have a new one. Did you know that every time there is a new pilot, there are two planes made: one spare and one for the pilot at that minute.”