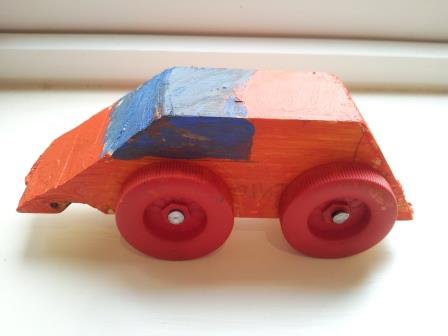 Cubs is a group that is part of Scouting; in it there are lots of other groups: Beavers, Cubs, Scouts and Explorers. I am a Cub, in the Couger pack (in Cubs there  are three packs: Couger, Jaguar, and Panther) and this week we are making little wooden Pinewood Derby cars to race on tracks.

For the cars each of us started with a solid block of wood. It also came with some wheels to nail onto them.

What I did first was to draw a picture, showing my design.

Next, I drew lines on the block and cut along them with a Hacksaw. 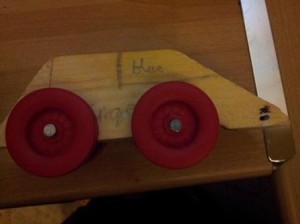 Then, I nailed the wheels into place.

And last of all, I gave it a nice coat of orange paint.

This is what my car looks like after it’s coat of paint: 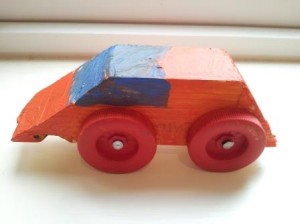 I hope to win but I can never be sure…

Unfortunately, I lost every proper race that I took part in, but at the end the children had some fun having some little races of their own. I won all of them apart from two or three, which I came second in.

The other cubs had made a lot of good cars; and a lot of them had done it before and that is probbably why I lost the race.

We also had a compettition to see whose car was the best looking but I lost that too.

I didn’t actualy do as badly as it seems; I was always about to win every race when my car jumped off the track and fell off.

And as for the other competition I came second. Not a bad position for a first time car maker.