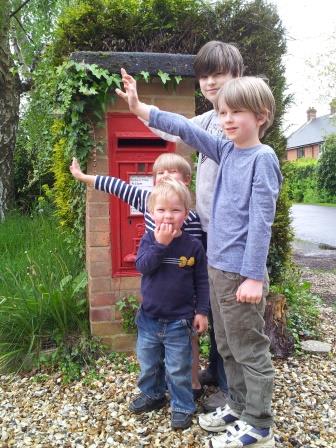 Mongers on the ‘Mic’!

Special Reporter Samuel asked: “How do the stoves benefit the people who use them?” 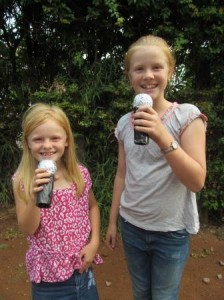 “The stoves help the mamas and girls whose job it is to collect firewood. They can walk for many hours to find firewood for the three stone fires.

The stoves are very efficient which means they only need to collect half the amount of wood. This means they can do other jobs or schoolwork, and are also safer, not needing to walk alone far from the village.

Cutting down less tress also reduces the deforestation problems to the environment which affects soil and crops and climate.

Also the stoves benefit people’s health. All the smoke from three stone fires is very bad for chests and lungs and also eyes, so there are many related health problems. The stoves let off very little smoke and with the wind protection can also be used outdoors which is even better! The stoves are also safer than three stone fires which reduces the risk of small children falling into fires and women getting burns when cooking.”

Q2.”Rachel, what was hardest about organising the Sodis Shake?”

The hardest thing planning the Sodis Shake was making sure we had everything well translated into Swahili so that everyone would understand what we were saying! We also had no idea if anyone would turn up at the event, and really didn’t know who or how many to expect!

Q3. Amisadai, what was the most challenging part of the water walk?

“The hardest part was to walk slowly and not run!

I was feeling energetic, but Tanzanians walk very slowly!” 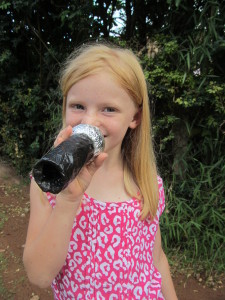 “My favourite thing about living in Tanzania is the Tanzanian singing.

I really like the singing because they have a nice accent and good dancing!”

Q2. Rachel and Tim, how will the Toyota Land Cruiser help you
in your work?

Rachel and Tim said: “A Land Cruiser will help us get to many remote and rural places to visit people and to work with people to start different projects.

It will be especially useful for getting about on some islands which we can get to by a car ferry but which do not have good roads. But maybe we will need Chitty Chitty Bang which could be a boat as well!!”

Q3. Louisa and Amisadai, what games do you like to play?

Louisa: “I really like to play Pictureka which is a new game we were given for Christmas”

Amisadai: “I like to play football and card games”

Detective Dan asked: Do you miss anything about England?

Tim misses family and friends and days out in the countryside!”

“We train people in the village we are working in to make the stoves. We usually have 20-30 people in the group.  Our best stove maker is Ezekiel who lives in Magozi, 60km from Iringa. No one in Mwanza is making stoves yet, but we have found some really good clay in the rocky hills (photo of brave men getting clay). So soon we will start training some new people to make stoves with this clay.”

Do you have bikes in Tanzania?

Amisadai and Louisa replied:
“Yes, we do, but they are in Iringa as they didn’t fit in or on our vehicle when we moved! We are hoping someone can bring them sometime soon!

Lots of people ride bikes here to get around. And there are lots of piki-pikis (motorbikes) too.

We LOVED riding them on Kome Island  when we had to ride them to get to a school on another part of the island! It was awesome and really fun!