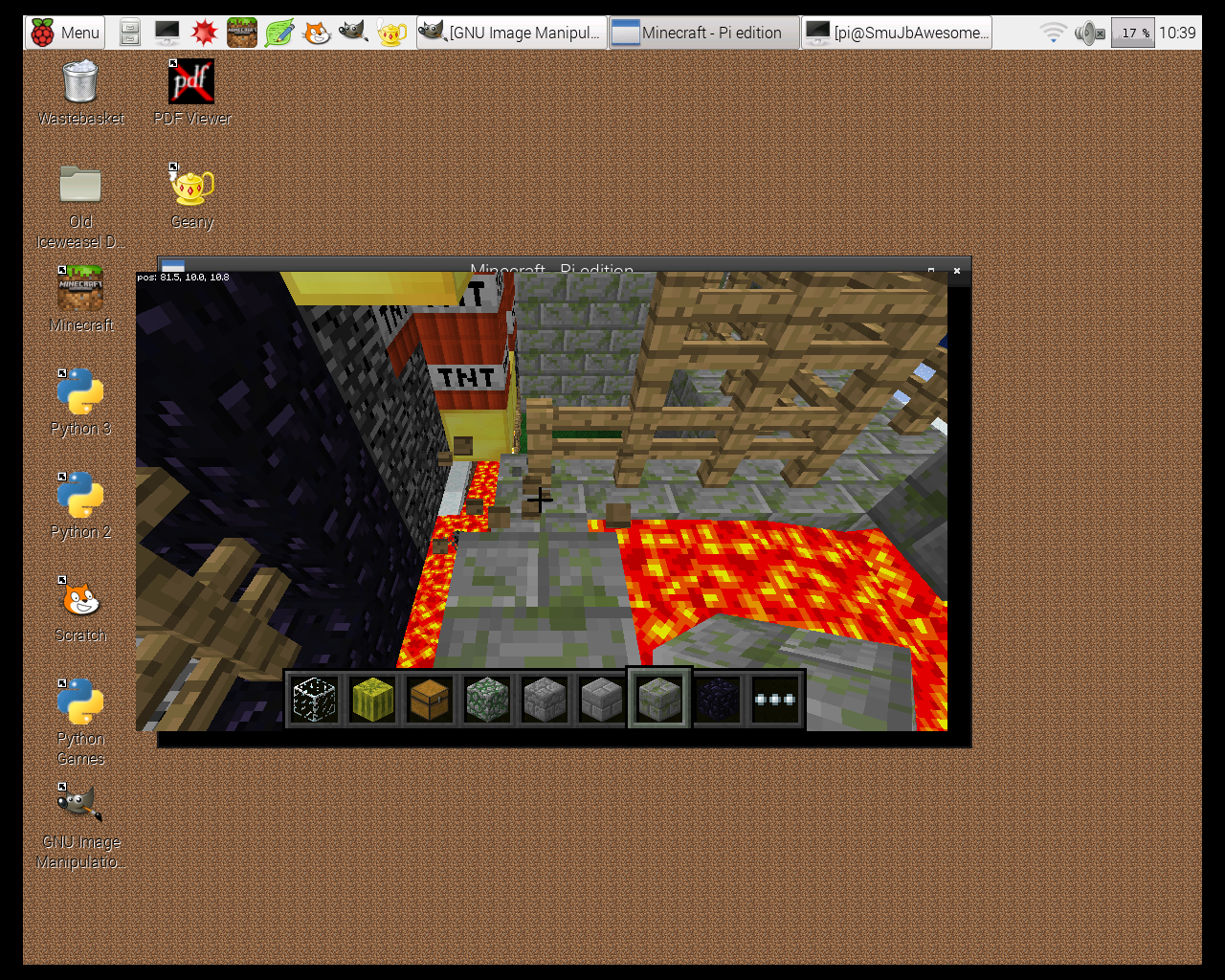 Many people get bored of Minecraft Pi edition very soon. Unless they like the coding side of mcpi (Minecraft pi), they usually get Minecraft PC instead. But, I  managed to edit the game code so that it is Survival! The licence says, though, that I cannot redistribute the mcpi source code. There is a solution. Somebody else has made a mod that turns mcpi into survival [ilink url=”https://www.dropbox.com/s/iutdy9yrtg3cgic/survival.bsdiff” style=”download”]here[/ilink].

Download the file. Find out where the mcpi data files are. If it came pre-installed, that will be at /opt/minecraft-pi/. If you downloaded it, it will be somewhere like /home/pi/mcpi. It could also be in the downloads folder. Once you have found the folder, copy and paste the survival.bsdiff file into the mcpi directory. Then open up a terminal window and type the following:

After doing this, you can type ./survival to run survival on your raspberry pi. There are a few glitches, but it is almost exactly like the earlier versions of survival on Pocket edition. But, after doing this, you will find that when you create a new map it is creative (it only has daytime). You still have lives and other survival things, but it is not full survival. To change this, you need to download a minecraft pe 0.6.0 – 0.8.0 map and install it. 0.7.0 + maps may have chests that will crash the game, though. The way to install custom maps is: Go to your downloads folder (usually /home/pi/Downloads) and find the zip file for the map you downloaded. Right-click on it and choose “Extract To…”. Type in “/home/pi/.minecraft/games/com.mojang/minecraftWorlds” If you have an earlier version of minecraft pi (0.1.0) then type in: “/home/pi/mcpi/games/com.mojang/minecraftWorlds”. Then click Extract. A window showing the progress of the extraction should appear, and then close. When it closes, the map has installed!

I have made some of my own survival maps; Tnt Trouble, The Grid and a few others. (Not all of these are mine, some are ports from Pc)

The Underground and prisonEscape do have chests that will crash the game, though. A simple way to test if a map will work with mcpi is to see if it has a “chunks.dat” file in it. If it does,  it will work. (if it does not, then re-download the map and try again.) Otherwise, it will not, no mater what you do. Another thing is that you can get skins, texture packs and… mods? Personally I have never tried mods. Some people say, though that some mods for pocket edition work, but others don’t. Texture packs for Pocket edition 0.6.0 – 0.7.0 and pc 1.3 are compatible, but may cause some objects to have slightly wrong images. Most skins work with mcpi. They can even be used on creatures; Skeletons, Creepers, Zombies etc… I have made some custom skins that turn all mobs into robots. A good place to find skins and maps is:  [ilink url=”http://www.planetminecraft.com/”]http://www.planetminecraft.com/[/ilink]. Only the skins and texture packs for minecraft 1.3 or less work with minecraft pi.

The survival mode mod is legal. The licence says that you cannot re release mcpi, but you are allowed to mod it. Mods can be released, and this is just another one. The coding still works with the survival mod on, so if you get annoyed with it, or if you like coding, then you can still use it. By typing ./minecraft-pi you can also run the creative version. You can do many things that you can do in normal minecraft (burn, die, use nether reactors, blow up tnt, craft things, use crafting tables, stoves etc…). You cannot post to chat or kill creatures, however. I have made some programs that allow you to kill creatures and post to the chat, and they will be downloadable soon.