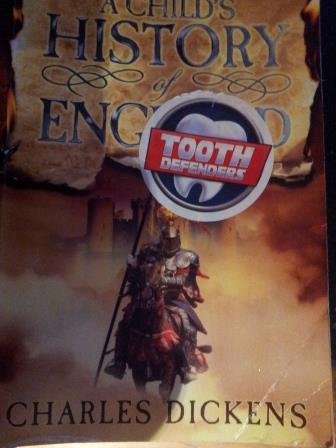 A Child’s History Of England

The story starts in the time of the Ancient Britons and Roman conquest, and goes all the way to the reign of William and Mary. I really like this book and I think it is very well written, except that Charles Dickens often expresses his own opinion about events in history.

He wrote this book for his six year-old son to share what he thought about what had happened in our country’s past. He believes that the king disliked parliament so much himself that if he had had the chance he would have blown it up. Every chapter covers a king or queen (but  some kings or queens that had a long reign have an extra chapter or two).

I think this book is probably best for over seven or eight year olds, but maybe as a read-aloud for slightly younger children.

(Sorry about the Tooth Defenders sticker, I was reading this book at the dentist’s and I got that sticker there. I thought it would be funny to stick it on and then it would’nt come off!)